Experts and participants represent public and private education institutions at all levels as well as government and corporate training professionals and digital learning equipment and content providers. Keep current on the ideas, technologies, and content that will help you develop and maintain leading-edge digital learning programs and products.

Recordings will be posted for two weeks for free on this page.

Become a TxDLA member for unlimited access to ALL of the above, plus over 40 more videos on digital learning!

Webinars will be held on the 2nd Wednesday of each month at noon Central. 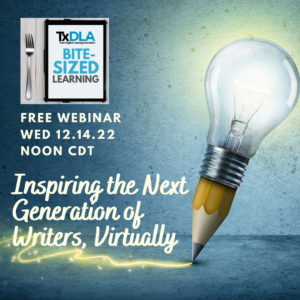 Inspiring the Next Generation of Writers, Virtually

During this session, we’ll explore how the American Writer’s Museum (AWM) in Chicago is engaging teachers and students virtually to foster conversations about complex issues and encourage the next generation of writers via their new Online Education Program.

The museum’s president, Carey Cranston, will discuss how the Online Education Program was developed with input from teachers. He’ll also share real feedback received from both students and teachers across the country who have participated in the program, and how the museum has pivoted their approach during the pandemic.

While many cultural institutions are offering virtual programming, what makes AWM’s program unique is that not only is AWM the only national museum dedicated to American writers and their works, but also their field trips focus on immigrant, refugee and other diverse writers and explore social issues.

Carey took on the role of President of the American Writers Museum in Chicago in September of 2016. Prior to that Carey had been serving for 12 years as President of Fox College, a private career college in Chicago, and prior to that he was a Vice President at Hill & Knowlton, a global PR firm, where he led digital and web services with several major clients. He also served as Director of Technology and E-commerce at Kemper Lesnik Communications, a local PR firm in Chicago. Early in his career, Carey taught writing at UIC and DePaul and worked at both the DePaul University Library and at Kroch’s & Brentano’s Bookstore. Carey earned a B.A. in English from DePaul University summa cum laude, a M.A in English from the University of Illinois at Chicago, and a M.S. in Library and Information Sciences from the University of Illinois in Champaign Urbana.

Do you love the life you live? As professionals, we learn to live and look the part, and juggle our personal and work life, like a Boss. But do you ever feel like things on the inside are different? Maybe you are feeling drained, running on reserves, tired of the monotony of life, devoid of joy and wondering if this is ‘it’?

If you can relate, then join me as we reconnect with ourselves and incorporate some simple wellness practices into life, so that the next time you are asked, ‘Do you love the life you live?’ it can be answered with an honest and resounding, ‘YES!’.

Tanja Smiley has been a secondary educator for 20+ years, both as a classroom and an online teacher. She began serving the Lewisville ISD community in 2006, after defecting from the “Golden State” of California and moving her family to the great “Lone Star” state of Texas.  Since 2012, Tanja has dedicated her efforts full time to the Virtual Learning Academy and helping students be successful in their online courses. She has served as both teacher and mentor for students.

Join us for Cybersecurity Awareness month and learn ways to help your students (and you) to be SMART from the Start in digital environments. Whether your focus is K-12, higher ed or adult learners, cybersecurity awareness and online safety are critical to the online experience. Let's learn some tips and tricks for being SMART online.

Kelli Erwin, EdD has been in the field of education for 20+ years as a classroom teacher, technology applications teacher, GT specialist, district administrator for instructional technology, professional development trainer, instructional design manager, and product owner. With a passion for understanding how we learn, Dr. Erwin keeps her focus on the science behind learning, best practices for pedagogy and andragogy and best practices for delivering virtual and in person learning opportunities. Her current focus is in the K-12 learning space.

What is Competency Based Education? Though it has been around for a while, many people still are unsure of what to do to implement it in an online, self-paced modality. Building a course and understanding what you need to do for student success and achievement is integral to the success of a CBE program. Join TxDLA and Dr. Rhonda Blackburn as we discuss the steps to develop and implement a CBE program, what you need to think about while doing this, and resources that are available to you.

The education landscape has drastically changed in the last two years. The COVID-19 pandemic created an education landscape of emergency online teaching, only to see that landscape shift as online, hybrid, and hyflex options became more commonplace in both PK-12 and higher education. Technology takes a more vital role in this changing education landscape requiring that educators take a more active role in choosing technology to enhance not only instruction but also belonging and community building in the classroom.

What has not changed in the last two years is the need for a framework to determine when and how to best integrate technology in the classroom. How do you choose technology that supports course outcomes, engages students, and does not overwhelm users? Join us as we discuss reasons to use technology and questions to ask yourself in choosing technology. We will offer a K-12 and higher education perspective as well as give you our top technology picks.

Dr. Michael J. Sorrell is the longest-serving President in the 149-year history of Paul Quinn College. During his 14 years of leadership, Paul Quinn has become a nationally regarded institution for its efforts to remake higher education in order to serve the needs of under-resourced students and their communities.

Students are more than the "seats" they fill in our classrooms. Hear ideas and learn new ways to use RSVP to build connections between you, your students and the teaching and learning experience. Download Slidedeck

It has been said that when it comes to learning design, development and implementation, we are each other's best resource. As part of TxDLA, we have found that to be true. Join us to learn more about how PK-12, Higher Ed, Industry and Government entities bridge the gap(s) by learning from and collaborating with each other. Get a jump start on the 2022 TxDLA Conference in Galveston.

Connect with the Leaders of Digital Learning Programs