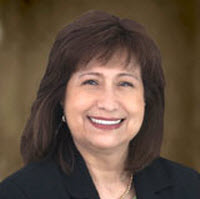 Dr. Jenny Girón has been spearheading the conception, development, and implementation of alternative and innovative instructional delivery systems and programs at El Paso Community College for well over 20 years. A national leader in distance education, Dr. Girón has served on the Texas Higher Education Coordinating Board, the Instructional Telecommunications Advisory Committee, the Distance Learning Advisory Committee for the Virtual College of Texas, the Texas Association of Community Colleges Distance Learning Advisory Committee, and the National Instructional Technology Council.

The following are just a few of Dr. Girón’s many accomplishments:

Dr. Girón fought for funding for laptops for distance education faculty; insisted on funding for upgrades and replacements of existing technologies in student and faculty labs; fought for technology in the classrooms; encouraged and helped support programs that put repurposed used computers into homes of those that couldn’t afford them; and kept our technologies free to be used by not just the college but also the community. She serves as a mentor to many – for those who are the first in their family to go to college, for Latinas, for women, for those from humble beginnings and for those who face obstacles of all kinds. She sets the example when others occasionally find new technologies bewildering, by jumping in and finding ways to not only make it work, but to make it work effectively and successfully. Dr. Girón blazes the trail so we can travel quickly to new horizons.

Dr. Girón’s focus has always been to find bridges over anything that separates education from those in need. El Paso is a high-risk, economically challenged community with 24% of its population of 700,000 classified below poverty level. It is Dr. Girón’s deep commitment to ensure education is accessible and inclusive whether it was when distance education meant videotaped lessons or teachers driving to locations off-campus, or now with the incredible opportunities that the internet has made possible.

Without a doubt, her modeling of the importance of new ideas will bear fruit far into the future with technologies we have not yet even dreamed of. Thousands upon thousands of students, faculty, and staff in El Paso and beyond have benefited from the rich array of initiatives that have occurred under Dr. Girón’s leadership, and we know that thousands more will have similar opportunities for many years to come.